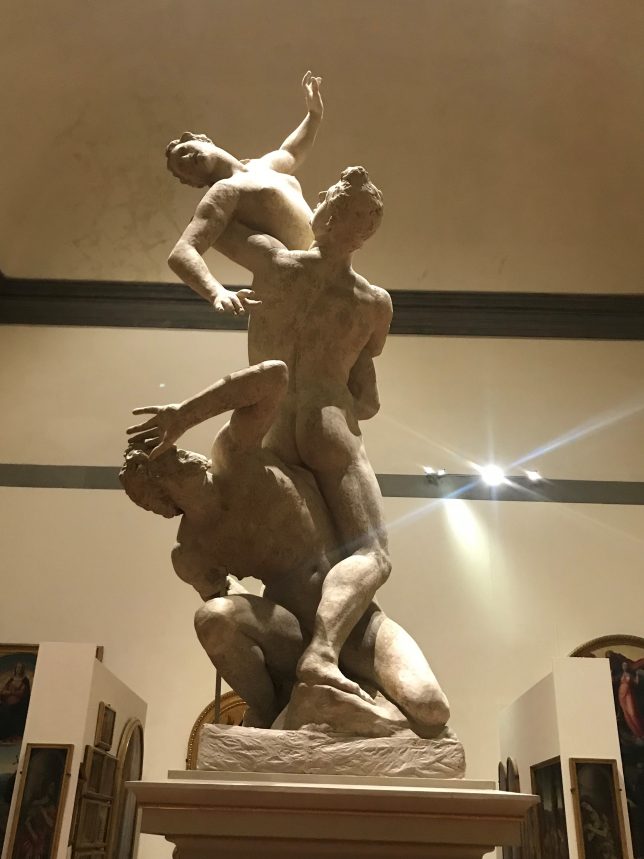 Located on a tranquil Florentine street corner, The Accademia Gallery would be quite easy to miss if it weren’t for the long lines of tourists waiting to enter.  At first glance one might not even recognize the name; Galleria dell’Accademia di Firenze seems to be the name of well… an academy!  While the museum was a teaching facility in the 18th century, it is now known globally as “the museum that houses Michelangelo’s David”.  While not a negative associate, the majority of the museum seems to be disregarded by the average visitor.

It’s easy to get distracted by the illuminated and seemingly angelic David that towers at 517 centimeters.  He stands perfectly, with almost no signs of aging on his beautiful white marble façade.  It is quite easy to notice how perfect David stands; however, visitors often don’t learn that the museum was redesigned in the 19th century specifically to house the David.  The custom tribune extenuates Michelangelo’s craftmanship and allows visitors to engage with the piece from all possible angles.  Benches are also provided, encouraging visitors to do more than just take a picture of the masterpiece.

Home to one of the most recognized works of art, the Accademia seems to be a victim of its own fortune.  While the David attracts visitors from around the world, it also pulls them away from the massive collection of altarpieces, musical instruments from the Medici, the Gipsoteca, and even Michelangelo’s Prisoners.  Large crowds seem to flock to Michelangelo’s masterpiece; however, the remainder of the museum seems to be empty in comparison.

It’s hard to imagine walking past a room filled with works by Giotto, however it seems all too common here.  The confusing layout of the museum certainly doesn’t help.  Clear signs would be helpful in such a space; however, the existing signs are misleading and overall confusing.  With all the grand works of art housed here, it is unfortunate that the labeling lacks in quality, and fails to communicate the significance of various works.

Michelangelo’s Prisoners seem to have also been victim to poor labeling and placement.  Placed throughout the hallway leading up to the David, viewers are offered an exclusive look into the mind of a genius.  The Prisoners offer a very unique preview for what awaits; however, it seems that visitors walk past them entirely, being pulled by David’s glow.  Even if one does walk straight to the David, it is not hard to realize the museum lacks technological advancements as well as the organization to provide a layout that encourages visitors to explore the many treasuries within the museum.

Audio guides are offered in a variety of languages; however, are not included with the ticket.  While following the path in Bartolini’s Gallery of plaster casts, viewers will find a continuously rolling video providing very intriguing information.  Unfortunately, the screen has been placed towards the end of the exhibition rather than providing information to the viewer while still immersed in the exhibition.

The Galleria dell’Accademia di Firenze is certainty one of the most visited museums here in Florence; however, it has potential to be so much more than just “the museum that houses Michelangelo’s David”.  Essentially a hidden treasure concealed in David’s shadow, the various collections that makeup The Galleria dell’Accademia are well worth the maze of misleading signs and photo crazy tourists.